skip to main | skip to sidebar


He said,
"Son, Have you seen the world?
Well, what would you say If I said that you could?
Just carry this gun and you'll even get paid"
I said, "That sounds pretty good"

I kicked in the door
I yelled my commands
The children, they cried
But I got my man
We took him away
A bag over his face
From his family and his friends

He said,
"Son, have you seen the world"?
"Well what would you say, if I said that you could?" 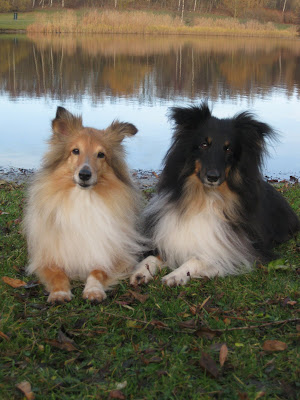 6 days to go... I can hardly believe it! But it is true, it really is just 6 days left before I have the new Robbie Williams-album in my hand! :) So, I think I better start telling you a bit more about the lovely concert the other week, and also give you a few snippets of what to expect! :)

Well, I wasn´t really at the concert... It was Rob´s first concert in 3 years, and part of the BBC Electric proms in London. No way in hell I could get tickets for that... :/ But still, lucky me! The concert was broadcasted live in cinemas all over the world (Rob got his spot in the Guiness book of records because of that, for the largest live audience ever I think), so Robviously me, mum, and my sister went. I was getting really excited allready the night before the gig, and could feel little butterflies moving in and starting to dance polka in my stomach. Aaah, lovely feeling :) 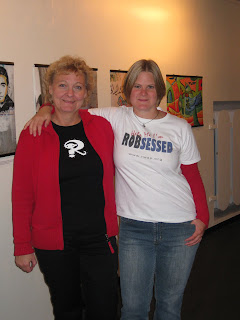 Me and mum in our RW-shirts, happy before the concert :)
I felt just a tiny bit bitter sitting in the cinema, waiting for the show to start. I soooooo wanted to be there! But hey, it was better than nothing, and the cinemacrowd was quite a good one actually. The atmosphere was high, and we all clapped inbetween the songs, laughed at the jokes, sang (eh, rather screamed) the bits in "Come Undone" (well you know the ones) and so on. It was GREAT seeing Rob on stage again! I think it just hit me a few weeks ago how much I´ve really MISSEED him. You see I´ve kept myself busy listening to other bands and artists, going to different concerts... But there´s really just one Robbie Williams, absolutely NOTHING compares to him! Simple fact.
Rob did a mix of some old classics and some of the new songs. He looked a bit scared in the beginning, to tell you the truth, but pretty soon he was right back in buisness again :) The new album will be called "Reality killed the videostar" (very clever, if you ask me), so of course he had to do THIS song:

Oh how I wanted to be there in the crowd, dancing along like mad... I know I´ve said it before, Robbie Williams live is PURE JOY! :)
As if it wasn´t enough with all that energi, he was damn funny too! HILLARIOUS even!! As always, he told a lot of jokes and stories inbetween the songs (that´s almost the best bits about the live-shows, lol!) I don´t remember much now of course (senile..), except that he had me laughing all through Angels. Yes, ANGELS! My favourite bit of the show, the emotional part where everyone sings along, where my heart aches a little, my eyes all teary and everybody gets sad and happy all at once... Well not this time, cause I was laughing so hard I got trouble breathing! No matter how I tried, I just couldn´t stop. Long time since I had a real laughing-attack like that, it was lovely :) And just a little bit embarrassing... he he! :S Mum laughed almost as hard (we´ve always had the same sense of humour), but she could control herself after a few lines of Angels.
Are you ready for a good laugh?? HERE is the story:

Maybe you don´t find it funny at all, but I do! (Well I´ve actually seen Rob do that "buuu-ing at the VIP"-thing more than once before, and I can just imagine the embarrassment when he realised he´d been yelling at the poor people in wheelchairs... lol)

Serious Rob now. I tell you, his shows are always a real roller-coaster of emotions! If you look closely, you can see he actually gets tears in his eyes... *naw* I really liked THIS song, think it could become a favourite of mine:

"It´s just that I´ve been bleeding lately... internally.." LOVE it! If I remember correctly that´s the R.Williams/G.Chambers-song :) Yay, thumbs up for more of that!

OK, one more new song for you my friends. THIS one´s really growing on me, wasn´t too impressed by it there and then:

I liked what he said in the beginning, "I thought this was about Michael Jackson, but it´s actually about me again", ha ha! Listening to Rob´s lyrics are like reading his diary, they´re often extremly honest. And that´s what I like so much about him. I love songs that are really personal, rather than just made up stories or "I love you, I love you, I miss you, I love you.." kind of shit. I remember him saying in an interview (when asked if it wasn´t scary to be so open about himself) that "Well people don´t believe me anyway. I can write about anything, cause noone think it´s true". I believe him, but I´ve kind of "known" him a long time too. In this particular interview I think it was the song "Feel" they discussed. Those lyrics are really really dark, and it breaks my heart to know he´s actually felt that way...

He seems a lot happier now though, I believe the break was good for him. Maybe for me too... LOL! I´m officially still "Robsessed" (definately!), but maybe a little bit more grown up about it. Listen to this: I´m even HAPPY he´s got a gilrfriend now! :) Well I´ve actually wished for that for many years now (I want him to be happy, he so deserves it more than anyone, considering all those smiles he has put on other people´s faces over the years!), honest! It´s just that the jealousy doesn´t hurt as much anylonger. Ok, maybe just a little bit then... :S But I did like the song he´s written for her, and she seems nice. (It´s the girl from the "Bodies"-video, for those of you who don´t know).

Ok, what more... Yeah, he showed us his grey hair! :) "We´re getting old, aren´t we?" LOL! I thought that was sweet. Yepp, we ARE getting old. Getting old together :) Sorry, I couldn´t help but getting soft in my knees and a bit nostalgic over that... Cause it really feels that way. When Rob first came into my life he was 19, I was 15. Now we´re 35 and 31. Looong time, and many many "ups and downs" along the way... (you wouldn´t believe!) We´ve been trough a lot together. Yeah yeah, I can see some of you shaking your heads right now, but I don´t care! Rob has been a great part of my life, and I´m happy about it. He´s given me soooo many laughs and memories (many more than a little crazy!) that I will remember for the rest of my life.

Anyway, I´m really really looking forward to monday! I wasn´t exactly blown away by the new songs the first time I heard them at the concert (or well, I guess I maybe was by "Blasphemy", really liked the lyrics...), but they sound very promising (not much of the "Rudebox"-thing going on, thank God!) Can hardly wait until I have the album and can sit undisturbed all by myself at home, listening to the songs (volume high, of course!), reading all the lyrics... Exciting! :)

(Sorry about the english, but I want my fellow Robbie Williams-fans outside of Sweden to be able to read it as well..)
Upplagd av Linda kl. 18:27 8 kommentarer: 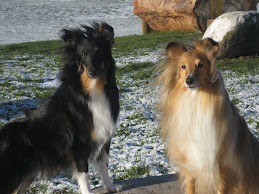